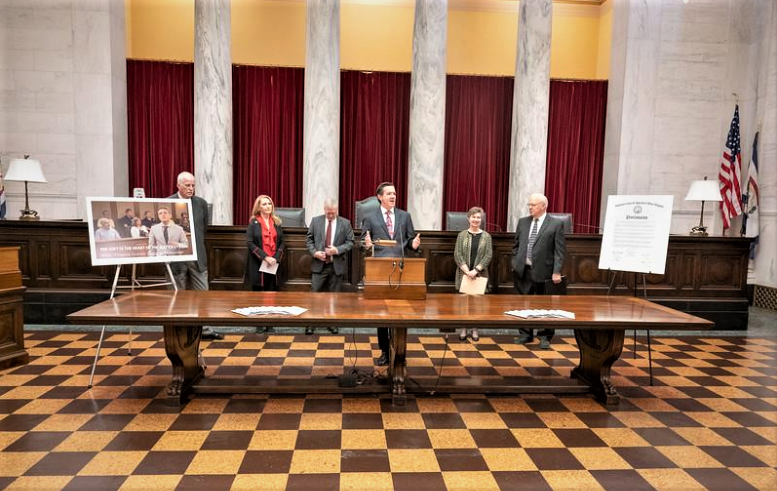 SJI awarded grant funding to the Supreme Court of Appeals of West Virginia (“Court”) to produce a jury orientation video for its unified court system. The video replaced a 30-year-old video featuring actor Raymond Burr. The Court drafted, produced, and disseminated a timeless video to be used during jury orientation to explain the basics of the justice system and the function of the jury as the finders of fact. The 10-minute video, along with a companion handbook, is anticipated to benefit judges, magistrates, court personnel, and the public for many years. The project was scheduled to film March 16-20, 2020, but was postponed for over a year due to the pandemic. The video was shot and recorded during a brief pause in COVID-19 concerns in West Virginia during the summer of 2021 when masks were not required in the judicial building where the video was filmed. It is critical that jurors are provided a concise but thorough introduction before performing their constitutional and civic obligation. The video provides an introduction into the significance of jury service and answers many FAQs.

The video is available at Jury Service in West Virginia – YouTube. DVD copies are provided to courts upon request.

The script of the 10-minute video went through several drafts with the help of representatives of the Circuit Clerk Liaison Committee and the West Virginia Judicial Association. Both groups had extensive input on the details of the script. The video was publicly released in November during an event announcing West Virginia’s first Juror Appreciation Month. In conjunction with the video, staff from the West Virginia Administrative Office of the Courts updated an existing jury handbook, a plain language instructional manual for prospective jurors. There are links to both the video and the handbook on the West Virginia Judiciary website: http://www.courtswv.gov/public-resources/jury-information.html.

“We are releasing a really important video that will be a tool to help build public understanding and awareness of what jury duty and service is all about and what happens in a trial. And we have a manual that circuit judges, magistrates, and circuit clerks can use as an education tool,” said Chief Justice Evan Jenkins.

Justice John Hutchison said, “The judiciary is the only branch of government that requires our citizens to participate so that we can do our job. If they don’t participate, then we don’t have the ability to resolve criminal issues. We don’t have the ability to resolve conflicts between our citizens. The jury system is the lynchpin of our type of government. The citizens decide disputes, not judges or other elected officials.”

“The right to a jury trial is like so many other rights, it comes with responsibilities. We all hope we never need a jury of our peers, but someone needs one every day. We all owe it to our fellow Americans to answer that call. Being on a jury is a rewarding experience,” Judge Ashley said. “I have had countless jurors tell me after they have completed their service what a good experience it was to be a juror and how interesting the process is.”

Are you a SJI grantee interested in being featured in our monthly newsletter and on our website? Follow the instructions on our Grantee Spotlight Submission Instructions page.