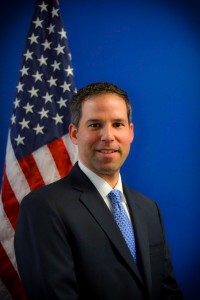 Jonathan D. Mattiello was appointed as the Executive Director in 2010, after serving three years as Deputy Director.  Prior to joining SJI, he served at the U.S. Department of Justice (DOJ) as a Budget Analyst working on federal law enforcement resource management issues.  Earlier in his career, he served as a Program Analyst at the U.S. Drug Enforcement Administration (DEA), and was detailed to the U.S. House Committee on Appropriations/Commerce, Justice, Science, and Related Agencies Subcommittee.

Mr. Mattiello is the recipient of numerous awards for service to SJI, DOJ, and DEA, including a Special Act Award for coordination and management of DOJ’s response to budgetary issues related to Hurricanes Katrina and Rita.  He is an Ex Officio member of the Conference of Chief Justices/Conference of State Court Administrators (CCJ/COSCA) National Task Force on Fines, Fees, and Bail Practices and the National Center for State Courts (NCSC) Research Advisory Council.  Mr. Mattiello began his federal career as a Presidential Management Intern in 2001, and served six years in the U.S. Army National Guard.  He holds a Masters in Public Affairs and B.A. in Communications from the University of North Carolina at Greensboro; a Certificate in Legislative Studies from Georgetown University; and Certified Court Manager and Certified Court Executive credentials from the Institute for Court Management.