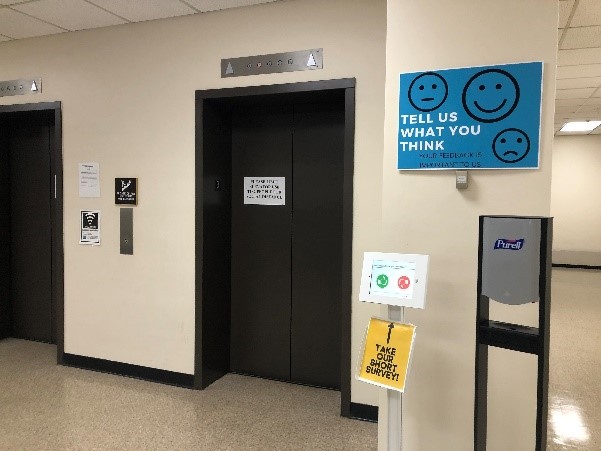 Twelve courts from around the country have completed a six-month pilot as part of LaGratta Consulting’s Court Voices Project, where they asked both court staff and court users for their feedback on courts’ pandemic responses. While most of the pilot courts had little to no experience collecting feedback from court users in the past, all were able to use tablet kiosks, web links, and/or QR codes to solicit insights. All in, over 275 court staff and over 3,000 court users participated. A complete project report is forthcoming in early 2022, but included here are some initial findings.

The range of feedback methods and contexts was vast, from links within Zoom hearings or court chat functions to in-person feedback kiosks as court users left the clerk’s window area or a particular courtroom. Most courts utilized more than one method to compare feedback between remote versus in-person services, as well as by different touchpoints of the court process, for example, at arraignments versus after status hearings.

The most common feedback topic among pilot courts was court users’ preferred mode of service: essentially, would you have rather handled your court business differently and why? Court user perspectives on these questions ranged dramatically from site to site based on court type, jurisdiction type and size, case type, and geography, to name a few factors. About half of court users appearing in-person in most courts said they prefer in-person service over remote alternatives (e.g., virtual court, phone, or email). In one court, the preference for in-person court was as high as 75%. But when the same question was asked of court users after utilizing a remote alternative, the responses show a more complex picture: even in a court where over half of in-person users prefer in-person, up to 100% of court users appearing remotely said they prefer remote. This suggests that there’s no one-size-fits-all approach, and when given a choice, court users might self-select into the service type that is best for them.

Preferences on specific types of remote alternatives varied too. In one court, 29% of court users said they’d prefer a “by phone” remote option; in another court, no one preferred that alternative. Regarding the rationale for these preferences, project findings add nuance to the conventional wisdom that convenience equates to remote services. While pilot feedback confirmed that most court users who prefer remote services identify ‘convenience’ as the main reason for that preference, ‘convenience’ is often cited as the reason court users prefer in-person service, as well. In one court, it was the top reason court users preferred in-person services.

Write-in comments from court users provide dimension to these findings, such as:

“It was very helpful coming in person actually talking to someone getting to know the many options,” “don’t trust unless in person,” and “Quiero ver la juez y explicar” [translation: I want to see the judge and explain]).

Perhaps, unsurprisingly, Spanish-speaking court users were most likely to name “ease of understanding” as their reason for preferring in-person services.

“I called and couldn’t get a live person so emailed which of course was easier.“

“Email address was on citation, would have liked to have been provided a phone number to contact“

Two main take-aways so far: (1) Courts should offer a menu of service options informed by local feedback, and (2) Tailored feedback should be invited in a range of contexts to ensure representative and useful insights. Simply importing the lessons from other courts or national studies may lead court leaders in the wrong direction.

A project toolkit detailing these findings and others will be published in early 2022 at: www.lagratta.com/court-voices-project.

Are you a SJI grantee interested in being featured in our monthly newsletter and on our website? Follow the instructions on our Grantee Spotlight Submission Instructions page.